The State of New York has a website where you can find data produced by the state. Today I am going to use Pandas to explore a data set for the winning numbers of the New York Lotto. This is a lottery where six numbers are drawn (each between 1 and 59), followed by a bonus draw of a single number (also between 1 and 59).

Using .head() gives you a short summary of the first five records. There is a column with the draw date (when the numbers where drawn), a column Winning Numbers with the six winning numbers (as a string), a column Bonus # with the bonus draw, and a column Extra # with an extra draw (which I do not understand).

You can rename some of the columns with .rename:

You can extract the Bonus column as follows:

Similar steps can be taken with the Extra column:

Here, the third line drops all of the rows with NaN.

You can use Altair for visualization:

For example, with the Bonus column you have:

I encountered a problem when plotting the data in the Extra column, and solved that problem with the following code:

You get the following two graphs: 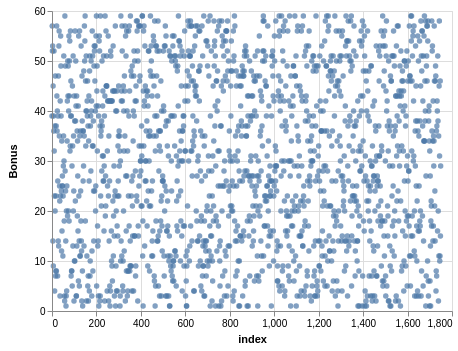 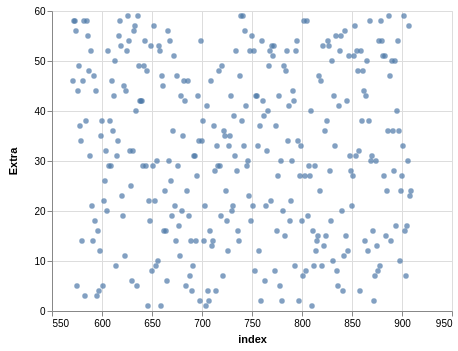 As you can tell, these scatter plots appear to be uniformly distributed, which is what you would expect for a fair lottery.

Another visualization tool is Seaborn. You can use Seaborn to great scatter plots with histograms:

Again, these histograms show that the distribution is almost uniform. In a future post I will look at the winning numbers.